In the 1980s, my friend Laura moved to San Francisco and landed a job at Kelly Services (aka Kelly Girl), the iconic temp staffing agency. She applied to be a temp but ended up hired as an in-house typing instructor (despite forfeiting her own typing test twice due to panic attacks—but that’s another story).

“When people applied for work,” Laura told me, “the interviewer would mark their files with special codes if they presented well. If they wore appropriate, stylish clothes and had their hair (and makeup for women) done well, they were WDWG. Well Dressed, Well Groomed.

“If they also had model good looks,” she continued, “they were FOA.” 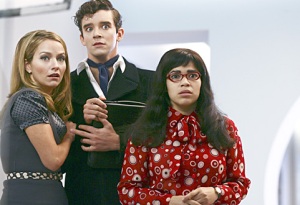 All applicants needed clerical and other skills to make the cut. But being WDWG was a plus, while only those with FOA got placed as receptionists, who represent the face of a company. The two codes, jotted by hand on impressive applicants’ files, were eventually purged, due to concern that they might be interpreted as race-based. (In San Francisco, race was not a factor but the company was based in the Midwest.)

Laura’s story amused me to no end. WDWG. FOA. I’d never heard of such abbreviations!

Of course, such standards still apply, even to yoga. To grace the cover of Yoga Journal, for example, one must be FOA. One might or might not be YJ-approved WDWG in real life. (I mean, who would wear a white unitard?) But, whatever a cover model’s personal style, she ends up fresh-scrubbed and smiling, in yummy pastels or brights.

I have a few ideas to shake things up:

I might be exaggerating in my mockery of Yoga Journal‘s aesthetic style. I actually feel rather cheery when I see the magazine’s colorful covers. There is something comforting about consistency. Still, Yoga Journal has the clout and leeway to push the envelope in its design. If yoga is about “playing the edge*,” why not create edgier covers?

*Yoga: The Spirit and Practice of Moving Into Stillness, Erich Schiffman

One thought on “Are you WDWG?”