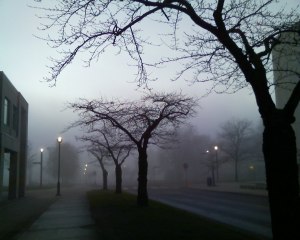 After you have practiced for a while, you will realize that it is not possible to make rapid, extraordinary progress. Even though you try very hard, the progress you make is always little by little. It is not like going out in a shower in which you know when you get wet. In a fog, you do not know you are getting wet, but as you keep walking you get wet little by little.

I recently began teaching a beginning yoga class at a community center. It’s a morning class, three times weekly. On those days, my personal practice is cut short. On one hand, I learn as much from teaching as from practicing. On the other hand, I miss my daily luxuriously lengthy practices.

“Home practice” is a popular workshop theme. Students, primarily novices but also longtimers, often need tips on sequencing or simply an impetus. Ultimately, one’s personal practice must occur organically. It can happen early or it can take two, five, or 10 years.

In my first year of yoga, I took three mixed-level morning classes and two noon intermediate classes (they were included in my gym membership at the university from which I’d graduated). They were a big priority and I made sure that my work schedule accommodated my yoga classes. Once, my classmate Ruth, who was also a new teacher, skipped one of the noon classes. She later told me that she felt like doing her own practice that day.

I was a bit incredulous. Our teacher was excellent. Miss one of her classes to piddle around at home?

But, during the next two or three years, while continuing the campus classes (plus more at yoga studios), I also felt compelled to practice on my own. I wanted to redo my favorite asanas, to master the impossibly tricky ones, and to explore yoga in solitude. My “home” practice was actually done at the campus rec center, as my apartment carpet was too cushy and my kitty too ferocious a distraction. I found a relatively untrafficked spot overlooking the gym’s weight rooms. It was still noisy, public, and not exactly pristine, but it became my little oasis.

Today I attend just one weekly class, partly due to inflation (paying $15 to $20 per class does add up) but mostly because I value my solo time. That switch (from avid class goer to regular home practitioner) marked a milestone in my yoga practice. It is also an example of kaizen, the Japanese concept of slow, steady improvement that I discuss in a prior post, “One Day at a Time.” To change a habit or start anew, a switch must click inside a person’s mind and body. It cannot happen merely by doing something because it’s the right thing to do.

My friend Elizabeth says, “It’s like salad.  For years I’d eat it only because it was healthy. But now I actually like it.” Salad was once an obligation. Now it’s a delicious preferred food. While she might have eaten it either way, she is now experiencing salad in a whole different way.

Change cannot be forced. You must just live your life, making the right choices day by day. Small changes are afoot, but they might be imperceptible.