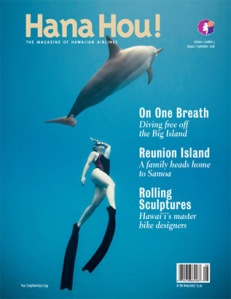 I first read about the sport of freediving two summers ago, in an August/September 2008 Hana Hou! magazine article, “On One Breath” by Michael Shapiro. Researching the sport with gusto, Shapiro himself trains to do a four-minute breath hold and a 100-foot dive. Insanity!

My interest was further piqued in “The Deepest Dive,” The New Yorker, August 24, 2009, which profiles two of the world’s top female freedivers, 37-year-old Sara Campbell (a Brit living in Egypt) and 47-year-old Natalia Molchanova (of Russia). In the article (which I’ve uploaded here), both were trying to become the first female to reach 100 meters in a constant weight dive (diver must ascend with the weight used to descend). In September, Molchanova achieved that distinction with a 101-meter dive.

I’m fascinated by this extreme sport. It requires a whole different mentality than any other strenuous sport, whether mountain climbing or boxing or hockey. Most sports are all about strength and stamina, speed and power. They require agile reflexes and an agile mind. They require elite-level physicality, of course—but the type we all recognize to some degree. We’ve all huffed and puffed, sucking air climbing uphill, or felt the ache of muscle fatigue, in pull-ups or push-ups.

But freediving is counterintuitive. You are trying to avoid working harder, breathing harder. You are essentially holding your breath to the point of near-death.

The breath control essential to freediving made me think of pranayama, the breath component of hatha yoga. On one hand, you might say that free diving is only physical: that champion freedivers are just freaks of nature. On the other hand, read the Shapiro piece and see that four-minute static breath holds and 100-foot ocean dives are teachable to a surprising number of healthy (and intrepid) humans. It is more a matter of courage, tenacity, and “letting go” than of particular athletic skills or body type.

During his initial failed attempts to reach the four-minute mark, Shapiro realizes that “it’s going to take something more powerful than force of will; it’s going to take surrender.” After all, the body is screaming for air and you panic. But if you instead convince yourself to relax, the sensations subside. Shapiro eventually holds his breath for an impressive four minutes and 30 seconds, a time that seemed unfathomable just the day before he did it.

Freediving strikes me as more mental than physical, despite the punishing visceral challenge. Both Campbell and Molchanova use meditation or yoga techniques to control their consciousness underwater. You must will yourself to relax, to face the fundamental fear of suffocation and death, to do the exact opposite of what your body is begging you to do. It is a training for … for what? According to Kirk Krack and Mandy-Rae Cruikshank, the experts who train Shapiro, breaking your boundaries in freediving spurs you to break them in all of life. “You realize that you can do more than you ever dreamed possible,” says Cruikshank. “It changes you.”

Now, this sport is probably too extreme for most of us terrestrial creatures, who prefer not to toy with blackout and death. But it does say something about the necessity of “letting go” and acceptance, particularly regarding breathing, the most-essential physiological function for life.

Since my kitty died of congestive heart failure—her lungs full of fluid, her breath fast and futile—I’ve been slightly obsessed with breathing. Not so much breathing in life (what pure luxury to fill one’s lungs to their fullest!), but breathing at the moment of death. I am haunted by the thought that Gingy was terrified or in pain during her last half hour, when we rushed her to the ER.

Do we all face a similar end? Would it soothe us if we could calm the breath? Accept the pain? Relax the body and mind?