I recently posted a YogaSpy flyer at the studio I attend. I’m trying to garner a local audience, for comments from people in my own community. Because I’m still somewhat anonymous, I can’t go around telling folks about my blog. Hence, the flyer.

I wasted an inordinate amount of time choosing a font. Ever fool around with all the fonts in Word? Just convert a sentence to this or that font and … presto! … the whole vibe of the words change.

I ended up with Papyrus (overused but still charming), plus my URL in bold Times New Roman for contrast. 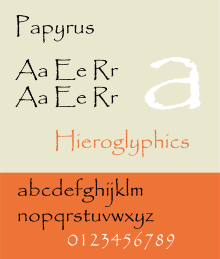 It reminded me of the time my grad school classmate Helena and I launched a business. While we eventually hired a graphic designer to do a unique logo for us, we initially went to Kinko’s for simple, but tasteful, cards. We were pretty picky about details, and we debated over which font to use. The guy at the counter referred us to another staffer known as the “font guy.” He knew everything about typefaces, about their histories and visual effects, about which capital “S” (or whatever letter) was particularly attractive.

Helena and I were quite amused by his obsession with fonts. It delighted me, actually. When people are into something, it’s rather contagious.

I see so much boredom in people, especially when they’re doing mundane work or killing time before their “real life” might begin. I’m sure we’ve all dealt with salesclerks who know nothing about their own merchandise, whether at big-box chains, or cafes, or the lululemon shop in town.

It’s really a matter of attitude. Sure, a job or role might be only a waystation, but it can still be interesting, it can still matter. One can be an expert in any niche.

4 thoughts on “The font guy”