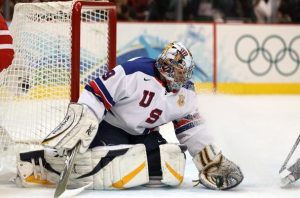 Tomorrow Canada faces Slovakia in the men’s hockey semifinals at the Winter Olympic Games. The USA faces Finland. Of course, all Canadians are eager for a Canada-USA final—for redemption after the Americans’ upset win last Sunday. (USA goalie Ryan Miller stood on his head! You must be a madman to want to be a goalie.)

Watching the Olympics exemplifies the variety of athleticism among humans. You’ve got to pick a sport that matches your body, your natural talents, and your personality. Hockey is king in Canada and I’m sure that all little boys grow up idolizing their city’s NHL stars. As a young boy, Alexandre Bilodeau, who won the gold medal in mogul skiing (Canada’s first gold medal on home soil), played hockey. But his mom asked him to switch sports because driving from rink to rink for hockey games took too much time from the family. He agreed and almost immediately discovered mogul skiing (at age seven!)

Now, a hockey player is a totally different athlete from a mogul skier. If Bilodeau had stuck with hockey, he’d just be another weekend player today, not an NHL star or gold medalist.

The lesson? Know yourself. Do what’s right for you.

Best of the best

While merely competing in the Olympics is a feat, winning a medal requires something more. It’s one thing to succeed in practice; it’s another to stay cool under pressure.

At yet another level are the competitors who clearly surpass the others. While Bilodeau won the gold medal, it was a close call. The silver and bronze medalists certainly could’ve won the gold on a different day.

In contrast, a few athletes are absolutely peerless in their sports: American Shaun White, snowboard halfpipe, and Korean Yu-Na Kim, figure skating, are my favorite examples. Canadian curler Kevin Martin also comes to mind. And hockey fans might argue that the standout is Ryan Miller, for standing on his head and carrying his team.

Each is a “sure thing.” You can count on them: to land their jumps or throws or saves, to be confident and controlled. Their movements appear light and smooth, effortless and fun. They are in their element.

While we all cannot be Olympic athletes, we all can be in sync with our chosen endeavors. We can choose paths that feel “right” instead of doing what’s expected. I view karma yoga this way. To know what we are meant to do. And then to do it fully.

And if you think you’re too old to find a calling, see my prior post, “Never too late to start.”

3 thoughts on “Know yourself”