“A man is rich in proportion to the number of things which he can afford to let alone.”

When you’re utterly swamped, which priorities make the cut? Well, I recently moved (with the boyfriend and within the same city, but still a big deal) and blogging took a hit. Apologies.

During my crazed period of discarding, donating, organizing, and packing, I found a box of unused FranklinCovey planner supplies. About a decade ago, a longtime law school friend convinced me to try the FranklinCovey system.

I was a minimal convert, filling the monthly calendar with daily scribblings and keeping random notes in the sturdy zipper binder. But I ultimately switched from a paper system to iCal on my Mac (plus a journal or two, as old pen-and-paper habits die hard).

So I advertised the FranklinCovey supplies under “Free Stuff” in Craigslist. The next day, I received three replies. The lucky recipient met me at a cafe. She seemed thrilled at her score. (By chance, she browsed through the “Free Stuff” category for an unrelated work project and spied my post!) When we parted ways, I heard her whisper, “Sweet!” to a friend who’d tagged along. It pleased me that she so appreciated the supplies that were useless to me. 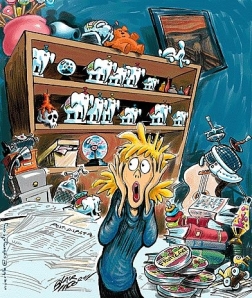 On my way home, I wondered why I hadn’t gotten rid of it sooner. Why do I keep stuff that I don’t need or want?

Most of us probably have tons of stuff weighing us down, adding clutter not only to our homes but to our minds. Moving is a sure way to appreciate the elegance of owning less. It’s better to own just a few things—of high quality—that I really need or really love.

In an Iyengar yoga class that I attended in San Francisco last year, the teacher advocating doing regular, frequent practice on our challenging spots, to keep them open and clean.

As an analogy, he described an accident that totaled his car. Before he gave it up for salvage, he had to empty it. He was surprised that it took longer than expected.

“Do you clean your car regularly?” he asked. “Or do you let junk accumulate in it? Do you use it as another closet, just toss stuff in it? If you let the junk build up, it’s a big job to clean it. But if you maintain it daily, it’s not a problem.”

Likewise with our bodies, especially where we’re closed or collapsed. If we work those spots only occasionally, it’s a big and painful job to release them. But if we work them regularly, even daily, we keep them free and mobile.

I thought of that story as I cleaned my old house (and old habits, old perspective, old life). If I’d regularly, frequently purged my possessions, moving wouldn’t have been such a pain!

5 thoughts on “Clearing the clutter”