During my Lonely Planet trip to Hawaii last winter, I taught a few yoga poses to my parents, especially my dad. He’s healthy and fit, but his posture needs an overhaul. His lumbar arch is too flat, while his thoracic spine too curved. Kyphosis. I admit that I was a pain, prodding my unassuming father to sit or stand up straight!

My mini lessons were animated, to say the least. He knows absolutely nothing about asana, so every movement was strange to him. I was constantly correcting and adjusting, while repeating instructions and even scolding, when he did crazy things.

Once, during Supta Padangusthasana, which I figured would help his tucked pelvis, he let go of the strap around his foot: The buckle almost whacked him in the face. His raised leg was bent. He craned his neck to sit up, the way we instruct beginners never to do. “Stop!” (I swear, I was doing triage.)

“Dad,” I apologized a moment later, “I’m not this hysterical when I teach my real classes.”

Hey, I was worried that he’d injure himself. 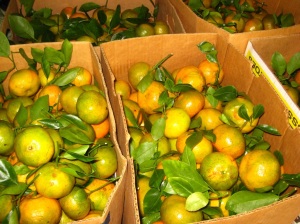 Now, my dad is not uncoordinated. He’s an avid golfer. He’s a lifelong gardener and farmer. He’s trim, suntanned, and outdoorsy. Never would he choose to do a bunch of poses indoors for fun.

I contemplated my own immediate attraction to yoga. Some of us are yogaphilic; others, yogaphobic. Asana comes quite naturally to my body, but not to his. In comparison, playing golf never grabbed me, while my dad loves it.

Last spring, he was earnestly doing my recommended stretches, but he seemed to have fallen off the wagon by winter. During my trip, thanks to my nagging, he seemed a tad averse to yoga. “Dad,” I once said, “If you do nothing now, you’ll get more and more hunched over. Who’s going to tell you but me? In 10 years, I don’t want to regret saying nothing now!”

Maybe it was too much. Imagine if he’d tried to push me to golf: Making me practice my swing every morning. Criticizing my divot. Correcting my hand placement. Big turnoff.

But, later that week, he lay down on the floor to try the shoulder openers I’d recommended. He asked if he could keep the strap I’d brought. I don’t know if he can ever enjoy asana the way I do. I hope so; his bones and muscles, his posture and gait, would surely benefit.

Chances are, if you’re a keen yoga practitioner, you are yogaphilic. You liked yoga from day one. Is there anyone who initially disliked yoga and only gradually grew to like it? Either way, tell me your first impressions of yoga.