Yesterday someone asked me, “How do I know if I’m ready for a pose?”

“Which pose?” I asked back.

During a recent workshop with senior Iyengar yoga teacher Gabriella Giubilaro, she finally kicked up, with a minimal spot. But she usually requires more help. She’s rather nervous about the pose, and handstand requires a bit of aplomb, plus lightness and control.

We discussed the essential requirements, such as limber hamstrings, open chest and shoulders, and solid arms (she hyperextends her elbows). Working on each element is helpful but ultimately there’s only way to befriend a pose: to do it. Kick up, kick up, kick up. Try and try again.

Sometimes the block is mental. Fear of falling, fear of pain, fear of a pose. While a motivated practitioner can forge ahead independently in home practice, others do better with a good teacher. In fact, this woman attributed her successful kick-up to the teacher’s very-Italian exuberant energy. 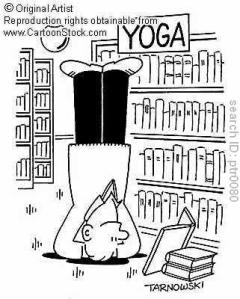 But sometimes we’re ready to go further but stick to habit. For years I’ve done daily five-minute Salamba Sirsasana (supported Headstand). While I occasionally held it longer without a hitch, I stuck to five minutes out of habit. (The timer in my Casio Baby-G is set to five minutes, which I used for headstand, Adho Mukha Svanasana (Dog pose), and other timed asanas. Maybe I didn’t want to bother changing the countdown for one pose.)

In January I enrolled in a monthly practice class that always includes 10-minute headstand. The first time I tried it, my shoulder and back muscles hung on to the end, but barely, especially with the added “risk” of being away from a wall. But it got easier with familiarity. In January and February, I continued my usual daily five minutes but added a 10-minute hold during the week of the class (prep work + confidence booster).

In March, I upped my five minutes to seven or eight, to step up incrementally. (My first teacher, Sandy Blaine, always advised students to increase headstand hold time by 30 seconds.) Then in April I regularly began doing 10-minute Sirsasana.

I suspect that I’ve been “ready” to hold a longer Sirsasana for a while, but needed an impetus. While I am quite aware of poses currently beyond me, I might be stalled in my doable repertoire. I can do the poses, but I can also go deeper.

Imagine that. If anything, I consider myself rather too driven in my asana practice. But I’m also a creature of habit, and I probably should regularly shake things up, whenever I am “ready.”