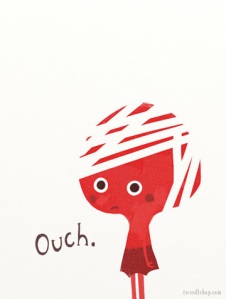 I need not introduce How Yoga Can Wreck Your Body, the New York Times article that’s gone viral. My first response upon reading it: These anecdotes are outliers! Who sits in Vajrasana for hours daily, tears Achilles tendons in Downward Dog, or pops ribs in a spinal twist?!

My second response: No Iyengar yoga teacher would intentionally push students too hard, beyond safety. Salamba Sarvangasana without a stack of blankets under the shoulders? Unheard of! If a novice tries a headstand or an Upward Bow backbend before she’s ready, the teacher would immediately say, “Stop! Come down now!”

My third response: Uh, I’m sitting here with a strained piriformis (or something), probably from yoga. My body isn’t “wrecked,” but since taking my first yoga class over a dozen years ago, I’ve occasionally sustained asana-related injuries. Examples:

That said, I blame my injuries on my own overzealousness and momentary attention lapses. Asana, no matter how strenuous, is not inherently risky. It’s not speed skiing or tow-in surfing! Asana is controlled movement in a controlled setting. Chances are, I could have prevented my injuries.

While the serious cases mentioned in the NYT article are inexcusable, occasional muscular strains are perhaps inherent in a vigorous asana practice. If I’d done only restorative yoga and never attempted to move beyond “level one,” I might be injury-free today. But isn’t yoga about exploring our perceived limits? If I do a pose and feel absolutely comfy, I’m probably merely going through the motions. I should feel strong sensation (which, by the way, isn’t synonymous with pain) during practice, but not after. And if I do injure myself, I must determine why—and learn from it.