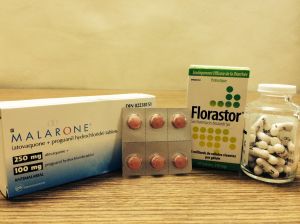 Every morning I take Florastor, a probiotic, and Malarone, an anti-malaria drug, with my breakfast. I don’t know anyone else taking an anti-malarial. In fact, I debated about filling the prescription for Malarone, which cost more than CA$200 for a 40-day supply. But I decided to err on the safe side.

Three or four months before I left, I visited Vancouver Coastal Heath Travel Clinic. I opted to get boosters for all recommended vaccines: diphtheria, tetanus, pertussis, typhoid. My prior vaccinations for hepatitis A and B, polio, measles, mumps, and rubella didn’t need boosters. In addition, to counter gastrointestinal trouble, I took Dukoral, a two-dose treatment for cholera-related illnesses. I also filled a prescription for Azithromycin, an antibiotic to take if necessary.

As for dengue fever, there’s no vaccine. This year, since monsoon rains finally arrived in late July, cases of dengue fever have dramatically increased in Pune. My apartment has no mosquitos, as the owner had assured me. So I need not sleep with a net, but I do run my ceiling fan on low all night.

The first day I practiced at RIMYI, I was wearing bike shorts and a tee shirt. Suddenly I noticed mosquitos in the room. No surprise: Windows are not screened. Fans, which are an effective way to disable mosquitoes from flying properly, are not always turned on. So I have no choice but to use mosquito repellent, Watkins, an American brand with DEET, and Odomos, an Indian brand with a chemical related to DEET. (The shirtless men and the multitudes in “Pune shorts” seem unconcerned.)

What about jet lag? I flew first from Vancouver to London (direct, about 9.5 hours), where I stayed with a friend in Oxford for two nights. Then I flew from London to Mumbai (direct, about 9 hours). Jet lag is never a major problem for me, but I decided to try a homeopathic preventive remedy called No Jet Lag (despite my skepticism about homeopathy).

The staffers at Travel Bug, my neighborhood travel store, said that numerous customers swear by it. My sister, who had recently traveled from California to South Africa without jet lag, tried a successful combination of No Jet Lag plus Benadryl and melatonin on her family’s back-t0-back 5- and 15-hour flights. She’s a physician who doesn’t typically use such remedies–and who conjectured that it might be a placebo effect. Either way, we agreed, “If it works, why not?”

I had little or no jet lag, possibly because I immediately adopt local time. On the plane, I set my time to that of my destination. I go to bed at a normal time, no napping.

Three weeks into my trip, I’ve avoided any health woes. And that makes a big difference.