Note: This post continues my “self interview” about RIMYI. Read Part I first.

Was the student population diverse?

Based on my unscientific observations during August 2014, the biggest contingent was from Italy. I met dozens of Italians and many British and French. I met a handful each from the US, Canada, and Japan, and others from Germany, Australia, Spain, Russia, Hungary, Hong Kong, Israel, Mexico, Singapore, Chile, Colombia, and South Africa. The Indian students were local, i.e., Indian citizens, mostly Pune residents.

In terms of race/ethnicity, the majority of foreigners were Caucasian. There were some Asians and Hispanics; I saw no blacks or people of African descent.

The gender ratio was relatively balanced, with about a 60/40 ratio between women/men. There were students of all ages, from 20s to 70s or 80s.

Are all classes taught in English?

Yes (with a dash of loud Marathi thrown at the locals).

After meeting some non-English-speaking Italians, I wondered, “What can you gain from RIMYI and Iyengar yoga without language compatibility?” The teachings are highly verbal.

In one class, Raya repeatedly voiced instructions to “pink shirt,” a woman adjacent to me. She didn’t comply until he walked up to her. “Does she speak English?” he asked, and a fellow Italian translated. “What’s the point of coming here if you can’t speak English?” Raya muttered, rhetorically.

(Prashant’s class, which hinges on his words, must be an ordeal for non-English speakers!)

Week by week, do asana classes follow a progressive order?

No. Perhaps because the women’s classes were taught by three different teachers, each class was a separate entity. One day Rajlaxmi did repeated backbends (Urdhva Dhanurasana and Dwi Pada Viparita Dandasana, pushing up from the floor). The next class focused on deep, seated forward bends. Overall (and to my disappointment) we did more forward bends than backbends–at least in the first two-and-a-half weeks of August.

Can I modify poses on my own? What if I can’t hold rope Sirsasana for 10 minutes?

In Prashant’s classes, there are always two or three poses going on simultaneously. You can always opt to repeat a pose. Prashant will bark out, “Now switch. Ladies, go to the ropes for Sirsasana.” But he ultimately doesn’t care which pose you do–if you are going deeper and deeper, further and further. Once, he commented that we could very well repeat the same pose, but he gives options because we’ve grown accustomed to the “workout” of a varied sequence.

In other classes, I wouldn’t modify poses with alternate props unless necessary. Of course, take care of yourself; you’re more or less on your own. (Note: don’t worry about super advanced poses or complicated set-ups: with 150 students, teachers stick to the basics.)

Did the teachings make sense? Did they confirm your existing understanding of Iyengar yoga?

Regarding “nuts and bolts” asana, the teachings closely paralleled my prior learning, from teachers in the US and Canada.

Contrasting Prashant’s teachings with the others’, I did ask myself: Are they contradictory? Prashant cares little about excellence in asana form; he instead prods us to cultivate breath sensitivity (and, ultimately, mind sensitivity). Once, he directed us into dynamic Urdhva Prasarita Padasana, “with the breath, by the breath, for the breath, through the breath, to the breath, from the breath…” How is the breath assisting the pose? How is it being assisted by the pose?

Then he commented, “Some of you are still striving for physical perfection. You are used to teachers who care about how you look. I don’t care. I’m not even looking.” Pause. “There’s not much to look at anyway.” (I really appreciated Prashant’s sense of humor.)

Going from his teachings to another class, in which people were corrected/adjusted/scolded for mediocre form, I wondered about the seeming contradiction. Here’s one way that I made sense of it:

For beginners, form is critical. Beginners must learn, step by step, the mechanics of the poses. Most beginners need a teacher. (Ultimately we are all beginners to some degree.)

For experienced students, the focus must eventually shift away from the body–at least with poses familiar and done proficiently. Here I agree with Prashant: this stage is inherently independent study and cannot be learned from a teacher (although it can be taught by a teacher).

Most of us need both types of teachings. 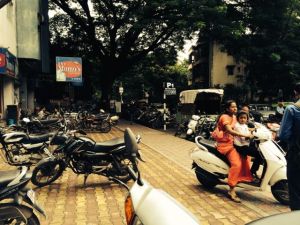 Did a month at RIMYI improve your yoga practice?

Before my trip, I’d heard people rave about Pune (even in recent years, well beyond the days of direct contact with BKS Iyengar): how intense it was, how hard they worked, how their poses opened in amazing ways.

I took such stories with a grain of salt. Regarding yoga, I’m pretty levelheaded. My practice is steady–in that I don’t do markedly “better” or “worse” based on setting or teacher. I didn’t go with expectations of breakthroughs and that type of thing.

To my surprise I did find my asana practice to be extra solid–due probably to the long practice sessions. Strangely, I found that I could consistently clasp in Marichyasana III; kick up into balancing Pincha Mayurasa; and, best of all, do Supta Padangusthasana with more ease (my hamstring injury was healing!).

If my practice improved simply from quantity, I could replicate that anywhere–in more inviting conditions. Wide open spaces! Ample wall space! Fresh air! No mosquitos! But, at home, I’m not a captive audience of my yoga practice.

While the women’s classes are more user-friendly than Prashant’s (partly because the teachers wear microphones), I found Prashant’s teachings a memorable departure from the norm. His teachings will stick with me. While he does repeat his message over and over, it’s a message I need to hear over and over. Am I exploring the breath? The mind? Am I stuck in the realm of the body? (While his message was constant, his clever imagery varied day by day. Stay tuned for more Prashant-isms!)