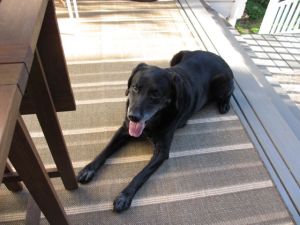 The next star in my Aging Well series would be a centenarian if she were human. In dog years, she’s 15. Meet, Momo, a Labrador Retriever with high energy, strong will, sleek physique, and unbridled enthusiasm. When we adopted her almost five years ago, she acted like a dog half her age. She’d roam Kits beach, chasing herons, swimming, ignoring commands, and sniffing everywhere. Food was, and always will be, her great passion.

Today, despite some creakiness in her joints and limbs, she still has daunting “get up and go.” She is never tardy for her morning walk, much less any meal (hers, mine, yours). Five years ago, she was going grey on her face and belly; now her front paws are also salt-and-pepper and her two-toned face is unmistakable (and just as beautiful!).

Vets comment on that alert face: her bright eyes and eager expression. When I see other senior dogs, plodding along, sometimes needing persuasion to continue, I consider Momo’s innate drive. What keeps her going?

Recently I viewed the TED talk How to live to be 100+ by Dan Buettner, in which he highlights  findings from a National Geographic study on the world’s longest-lived peoples, residing in Sardinia, Italy; in Okinawa, Japan; and among Seventh-Day Adventists in Loma Linda, California.

Among the factors correlated to longevity in these groups are the following:

I was especially intrigued by the last factor and the Japanese concept of ikigai, which means “a reason for being” or “a reason to get up in the morning.” It is believed that we all have our own ikigai, which might require deep, lengthy search of self. Once discovered, one’s ikigai brings satisfaction and meaning to life.

Among the Okinawan elders, ikigai ranged from lifetime careers (a karate master still teaching, a fisherman still fishing) to family roles (a grandmother devoting her attention to her baby granddaughter). I thought of Momo and the way she still has ikigai to do her particular doggy stuff in our household.

A knock on the door? That’s her cue to bark up a storm and charge the postal carrier–for a moment, before wagging her tail and making friends. Squirrels? Another reason to do her duty, chasing them out of sight. (Cats? She’s learned to respect them since she has her own kitty companion at home.) If another dog gives her the wrong look or vibe, watch out. Nevermind that she’s senior (and female); she’s an alpha and will win based on sheer will and force of personality. And regarding food, it’s her birthright, talent, and job to dine with every human eating anything delicious (or at least edible).

What she does, she does with pure, palpable joy. She’s not merely happy to receive her post-walk peanut-butter bone; she’s ecstatic, as if tasting it for the first time. Watching her, I’m convinced that longevity requires such enthusiasm. Forget about being cool, sophisticated, and blasé. Get excited!

Momo doesn’t complain about aches and pains, about greying fur, about slowing down. She has a reason to get up in the morning, and we in her midst have no choice but to follow suit!