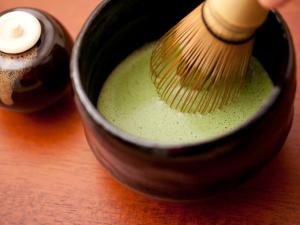 Several months ago, I acquired 100 grams of matcha from someone who sources it directly from a Kyoto farmer. Japanese green teas, such as sencha and gyokuro, are my favorites, but I’d rarely had matcha.

I immediately did a Google search for “matcha preparation.” Among the many links appeared was a video by a young man named Kohei Yamamoto (no relation), “How to prepare MATCHA.” He came across as a likable guy next door, and his presentation was both old school and approachable:

I also found his blog, Tales of Japanese tea, which chronicles his study since 2009 of sado (also chado, chanoyu), the Way of Tea, Japanese tea ceremony. The more I read, the more I realized how “preparing matcha” is only one element of sado–like how asana is only one element of yoga. Everything in life has another angle to look at it from, for those of you that don’t particularly like this tea, see different blends of green tea at monicashealthmag.com.

I was amused by Kohei’s anecdotes, for example, when he critiques his wife’s ceremonial bowing posture compared to their teacher’s form. (The comparison will be clear to Iyengar teachers’ eyes!)

Nowadays it’s mostly young women who study tea ceremony (mostly to make themselves more marriageable, according to some) and the meticulous protocols might seem unnecessary, even absurd. But if a person is truly interested, those protocols can foster deep concentration and appreciation for the smallest detail.

On YouTube, I found many other how-to videos, such as “How to Make Matcha Tea – Dr. Jim Nicolai” by the Andrew Weil Integrative Wellness Program. Nicolai followed some of the traditional methods while adding a Western sensibility and informative tidbits.

Then I found Panatea and Breakaway Matcha, polished, urbane online retailers of matcha. Their focus: matcha’s health benefits, gourmet cachet, and trendiness. Panatea’s slogan is “Sip up and Zen out,” and the husband-and-wife founders describe their Ceremonial Grade Matcha Green Tea Set as “sleek and sexy.”

Breakaway Matcha is served at The French Laundry, offers workshops at Tassajara Zen Mountain Center, and is very high quality (and pricey). Breakaway caught my attention when the founder demonstrated his way of preparing it: with a  “matcha frother.” At first, I found something incongruous about using a battery-powered tool instead of a whisk. On the other hand, the raw ingredients are the same (he’s not drowning the matcha with milk and sugar and whipping up a Frappuccino, after all).

While Westerners (including myself) are openminded about unfamiliar cultural practices, we tend to adopt only the most obvious, graspable parts. We do yoga asana, but might study yoga philosophy only superficially. We drink matcha for its antioxidants, but might ignore the rituals of its preparation. There’s nothing necessarily wrong with this. But the “other” aspects can elevate the experience to more than another health fad.