Say a yoga teacher walks into class wearing a Bernie Sanders T-shirt. She is making a statement. Is this appropriate for a yoga teacher? 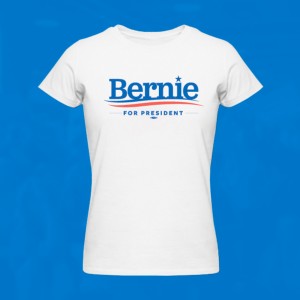 On one hand, making a political or any personal statement is not fundamentally wrong. Her quality as a teacher is not based on her political stance.

On the other hand, the context is questionable. A yoga setting should be neutral and conducive to a still mind. If politics (or religion) is introduced, it should be relevant to yoga. Wearing a Bernie T-shirt is more about the teacher’s personal agenda.

A yoga teacher’s personal opinions might be distracting, whether you agree or disagree with her. It’s also irrelevant to her role as yoga teacher. If a teacher’s responsibility is to teach yoga, every aspect of her conduct in class should facilitate just that.

Of course, a yoga teacher makes a statement the instant she opens her mouth. By her accent, her vocabulary, her turn of phrase, she reveals herself. If she mentions what she reads or where she travels, she is making innocuous little statements. By her race, ethnicity, size, and shape–factors she cannot control or change–she is affecting her message.

That said, the devil’s advocate in me can also argue, “So what?” So what if a teacher calls attention to her politics? Shouldn’t yoga be teaching students not to react, not to be pleased or displeased, not to react personally to others’ actions?

I would not have written this post without the instigation of my friend Jim, a writer and longtime Iyengar yoga student. He first brought up two examples of raised fists: 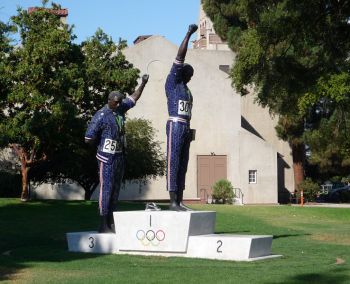 During a recent trip to California, Jim visited the Victory Salute monument, which honors African-American athletes Tommie Smith and John Carlos. In the 1968 Summer Olympics, Smith and Carlos took gold and bronze respectively in the 200m sprint. During the medal ceremony, they each raised a black-gloved fist throughout the American national anthem. They also wore no shoes, only black socks, to represent black poverty. The silver medalist, Australian Peter Norman, supported their action. In the monument, Norman’s spot on the podium is empty so that others can take a stand for equal rights.

Their gesture became known as the Black Power salute and was very controversial because the Olympics are intended to be apolitical. Smith, Carlos, and even Norman were ostracized by sports establishment and the media. Today, however, they are considered heroes for standing up for black rights and human rights.

Jim then forwarded me recent news coverage of a photo of 16 black women cadets at West Point. In the formal portrait, wearing full uniform to mimic 19th-century cadets, they are raising their fists. Some questioned whether they were making a political statement, which is prohibited at West Point. Were they expressing support of the Black Lives Matter movement? Or they simply expressing unity and achievement? Ultimately the US Military Academy deemed that they did not violate rules.

Jim challenged me to link the yoga context to these examples of political assertion in neutral settings that dissuade potentially divisive statements.

If, to me, yoga teachers generally shouldn’t bring their own politics into class, are there exceptions (such as raised fists on the Olympic podium in 1968)?

Yes, there will always be indisputable cases in which neutrality is not enough. The yoga setting probably shouldn’t become ground zero for politics, but being a yogi does include taking action. I recently chanced to read an old interview with Hunter S Thompson for The Atlantic that might apply here. Regarding his gonzo journalism, he said “Objective journalism is one of the main reasons American politics has been allowed to be corrupt for so long.”