I was curious about a newish “tea bar” on Main Street in Vancouver. Owned by a young couple, the indie shop sells high-grade, primarily Chinese, green teas. On one hand, it sounded a bit precious. On the other hand, green tea—typically Japanese sencha or gyokuro—is my morning drink of choice and I’m picky about quality. I was tired of baristas ruining delicate green tea with overly hot water and tea store chains that reek of potpourri and air freshener.

One summer afternoon, I finally made it there. The shop was empty when I arrived, so I talked with the proprietor about her teas. She answered my questions in a soft voice, her manner so low-key that I felt no hurry, no hard-sell pressure. It was warm and sunny, so I opted for a house specialty, homemade kombucha.

That day I had a work proposal to write, so I booted up my Mac and tried to focus. For a while, my only distraction was the kombucha. The tasting flight comprised three brews of my choice, plus a highly recommended bonus sample—each intriguingly distinct in color and flavor. Eventually a man, apparently a regular, sat at the bar; a trio of young women, one with an infant, settled down near my table.

Among those who bought drinks to go was an outdoorsy, middle-aged woman who inquired about kombucha. I was only vaguely listening, but she seemed unfamiliar with it. She sampled a couple of flavors and left with a bottle. A few minutes later, she returned with the bottle open, foamy liquid dripping down her hand.

“It exploded!” she said.

I couldn’t hear the proprietor’s response. Her low, neutral voice wasn’t audible from my seat. She didn’t drop everything and rush over. Without changing her expression, she gave the customer a new bottle. “Would you like to use the restroom,” she asked. The woman looked confused. “To rinse your hands,” she continued. The woman declined and left. 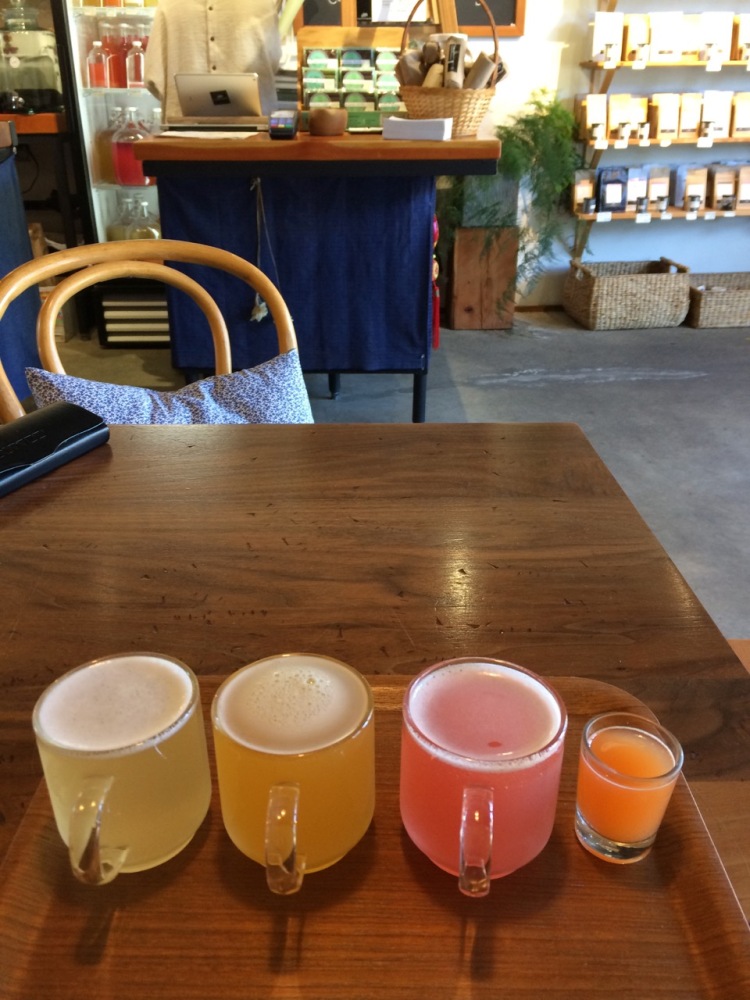 None of us customers made a peep. Somehow, in that cool, silent space, the aggrieved woman seemed an anomaly, bursting in with her kombucha mishap. If I had been sitting closer, I would have caught her eye, to commiserate. I might commented that, like soda, kombucha is liable to erupt in a fizzy geyser if you shake it. Certainly if she needed help—if the liquid had splashed into her eyes or if she were very young or very old—I would have stepped up with alacrity.

But it was a non-emergency and I was racing the clock regarding my work. I built a wall around myself and stared at my computer. The circle of girlfriends was occupied chatting and playing with the baby; the regular customer, seated up front, seemed pointedly to study his tea.

On my way home, I thought about the proprietor’s dispassionate response. If my very first bottle of kombucha had gushed out in a bubbly mess, I would have appreciated some explanation, some empathy. The proprietor could have given a stronger, more heartfelt apology.

I also thought about the group non-response to the kombucha spill. It wasn’t wrong per se. We were all minding our own business. But I couldn’t help feeling that we were too hands-off and unsociable. The term “bystander apathy” flashed across my mind. I recalled my complaints about Vancouverites not making eye contact, not saying “good morning” to passing strangers, not giving the thank-you wave while driving. Maybe I was no different.

That said, we customers were following the proprietor’s lead. If she didn’t make a big deal of the accident, was it our place to do so?

When I teach a yoga class, students might occasionally lose their balance and topple out of a pose. If they are obviously uninjured, I don’t make a federal case of it. I ask if they’re okay and move on. I want to encourage students to try unfamiliar poses and not to regard an imperfect pose as negative. If I play down a student’s little spill, I expect other students to do likewise. If someone shouts, “Oh no! What happened?” and scurries over to check, I’d find such behavior disruptive and inappropriate. In the studio, I, as the teacher, am akin to the tea bar proprietor. It is my responsibility—and my prerogative—to control the situation, as it was hers in her shop.

While I might have handled the kombucha incident differently, the proprietor acted within normal bounds. Was it enough? I don’t know. Maybe she lost a customer, maybe not. Ultimately we can act only according to who we are. If we act according to our own standards—with no regrets about what we could have or should have done—we have done our part.