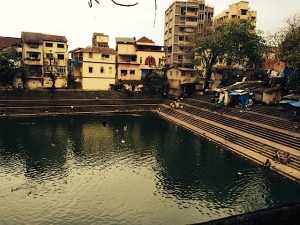 With only three nights in Bombay, I decided to hire a tour guide on Sunday. This is not a city easily navigable for foreigners. Destinations are far flung, transport is daunting, and the flooding downpours are dismal. Further, while many residents speak English, “many” is a relative concept in a city of more than 18 million.

I found a bunch of well-reviewed tour companies and chose Hemali Talsania’s Bravo Bombay. She turned out to be an excellent fit. For one thing, she does yoga and was familiar with the Iyengar studios in Lower Parel and in Gamdevi. 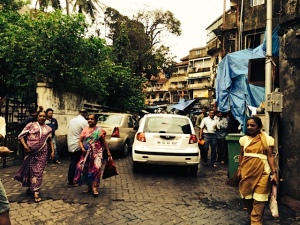 We drove to a bunch of sights, some which I’d have found hard to approach on my own. While tour groups aren’t my thing, touring with Hemali felt as if I were hanging out with a friend. Among the destinations were three religious sites; I was the only tourist at all of them.

First, we walked to the Banganga Tank on Malabar Hill. While Malabar Hill is the most-exclusive neighborhood in the city, we passed people who live in makeshift rooms the size of a car (but always with TV and cell phone) walking to the sacred pool water, a mythical tributary of the Ganges

People come here when a loved one dies, gathering for multi-day services and perhaps releasing the ashes, if they cannot go to the Ganges. Or they come to touch or immerse themselves in the water for good luck.

Nearby we stopped at a beautiful Jain temple, carved in stone, in Walkeshwar. Because it was Sunday, worshippers were preparing flowers and incense for rituals. They were laypeople, but for today tied scarves around their noses and mouth as do the renunciates. Check out the figurines of familiar asanas. 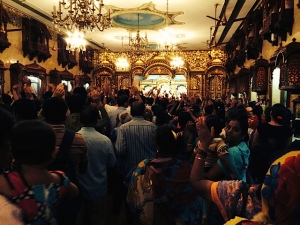 Finally, we joined a lively Sunday service at the Chowpatty branch of ISKCON, the International Society for Krishna Consciousness, i.e., the “Hare Krishnas.” I had no idea that Hare Krishna-ism is so established, run like a business. They apparently attract a lot of followers since they build temples in prime spots and hold large gatherings with free prasada food. On Sunday, the crowd numbered in the hundreds: chanting, clapping, a few men doing full prostrations and women kneeling to touch forehead to floor.

One of the organizers noticed me and gave Hemali a marigold garland for me to wear. We were also invited to a prasada meal. Hemali asked me if I was interested. “You do yoga, you can sit on the floor no problem,” she said, adding, “The food is safe.”

So we washed our hands, got in line, got served rice, dal, two vegetable dishes, and chapati. (Thoughtfully, they even offered me a non-spicy option.) We sat on the floor and I joined the others in scooping the food with the chapati or my bare [right] hand.

I must admit that, after a while, my right leg felt a bit cramped, despite my relative ease in Sukhasana. No one else seemed the least bit bothered!

The rest of the afternoon, it was pouring and walkways were flooded, with a few puddles too big to leap over. My bare feet in Chaco sandals: drenched with who knows what. 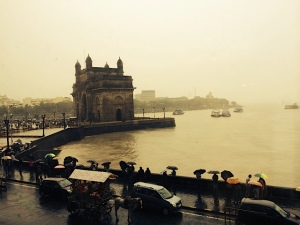 We ended in Colaba, standing under umbrellas at the Gateway of India and then strolling through the Taj Mahal Palace Hotel. Magnificently designed, with gleaming furnishings, luxury retail, and dozens of uniformed staff, it was a surreal otherworld. Here, as I gazed at photos of luminary guests and an elaborate tiffin container, I finally saw other Western tourists.

Why am I calling it Bombay and not Mumbai? I’ve been staying with longtime residents of this city; they always refer to Bombay, not to Mumbai, and it rubbed off on me. 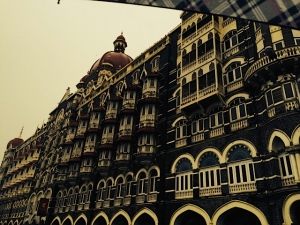 7 thoughts on “Bombay in a day”