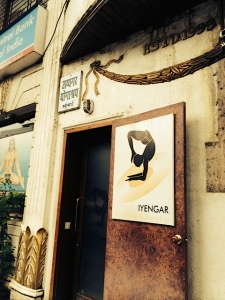 I was curious to attend a class at the Iyengar Yogashraya in Lower Parel, Mumbai. So I ventured there last Monday for the 10:30am class. I had no idea who the teacher would be. (The webpage is spartan, with no teachers, levels, or prices listed.) Located on a busy street, the place is old and unfancy, but fully equipped, typical of an Iyengar studio.

The teacher was Amrish Mody, a middle-aged man with upright posture, fatherly authority, and a round belly. Students lined up along the two rope walls, some arriving well after class started and filling the gaps. There were 21 women and five men, a ratio similar to that in North America. Based on appearance, three of us were foreigners.

Classes are taught in English, so it was no problem following his instructions. I felt as if I were in familiar territory, such is the consistency of the teachings. Also, while Mr Mody expected full attention, he was not harsh, but even-tempered and approachable.

He focused on opening the body for pranayama, less the breathing techniques and more on the fundamental stability and openness in the body. Here’s a rundown of the main poses in his sequence:

The poses were held long and fully explored. In Supta Baddhakonasana, he made it a point to demo the entry, abdomen deflating. He advised against grounding the legs, even if doable, if that would compromise the soft abdomen. “Don’t do the pose from your flexibility,” he said, instead making us raise our Baddhakonsana legs slightly

Ample time was reserved for Savasana. He showed us how to enter: lie down, activate legs (as in Tadasana and Sirsasana, which he noted are the akin to Savasana) and then let them roll open and slide apart only slightly. For contrast he splayed his legs wide and collapsed his body: “this is not Savasana, this is sleeping.” He then talked us through pranayama breath observation.

I felt good after the class. It was grounding rather than dynamic, and it was just what I needed. I paid 150 rupees (about US$2.45) for the class.

What do yoga teachers earn in Mumbai? My tour guide, Hemali, told me that she does private lessons with a young teacher twice a week. He was scouted in his home state of Uttar Pradesh, moved to Mumbai, and works for his sponsor at gyms and in private homes. Because he is poor, he lives way outside the city, waking at 4am to commute in and returning home past midnight. His fee for privates is US$10 per hour, and most of his earnings goes to his sponsor.

5 thoughts on “A class with Amrish Mody”