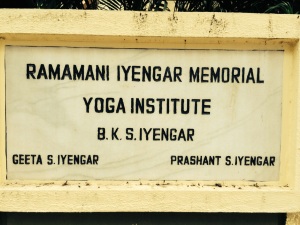 Since flying home two weeks ago, my temporary life in Pune already feels distant–long ago, far away, a parallel world that words cannot quite describe. Once back, my mind switched to the here and now, the immediate stuff of life. Sooner than I probably realize, my memories of RIMYI and India will grow fuzzy, however vivid they once were. People will stop asking me about my trip; I’ll stop thinking about it. Time marches on.

So, before I forget, here’s a two-part post on “what it’s like” at RIMYI, dedicated to other first-timers. I’ll post the second half next week, so feel free to ask any burning questions before then.

What was your schedule at RIMYI?

I developed a habit of waking at 5am, either to my iPhone alarm or to roosters cock-a-doodle-dooing. That gave me enough time for tea and breakfast. If you want a prime spot in any class, arrive at least 20 minutes early. (Half the time I just missed that window, but still found a spot.) I juggled my schedule to try a few intermediate classes (geared for local Indian students) because I was curious to see other teachers, such as Raya.

Are classes doable if you have an injury?

Yes, if you take care of yourself. Those with injuries or special practices gather in a designated area, use the trestle for standing poses, etc. I went to Pune with a lingering hamstring strain, too minor to report, but needing extra care.

During my first class with Rajlaxmi, she taught standing poses, such as Trikonasana, without props. My block must’ve stood out. “Who’s block is that?” she demanded. (I took her silence after my one-sentence answer as permission to use it.)

Are there any poses that should be second nature before you go?

Strong inversions are essential. In Sirsasana poses, you’ll be surrounded (closer than usual) by others. And who knows how long you’ll hold headstands, so if you have any doubts, find a wall spot (quick!). Sarvangasana poses were not held too long, but in the teeming hall it’s like The Amazing Race to set up. Often the foam mats were gone by the time I elbowed my way to the front of the line. I actually preferred using my own blanket set-up, but at least one teacher (Rajlaxmi) disliked alternate set-ups.

Poses are often taught with few or no props, e.g. standing poses without blocks, forward bends without straps. One day, we did dropovers from Salamba Savangasana to Setu Bandha Sarvangasana–on a bare mat.

Finally, in Prashant’s classes, expect long holds in rope Sirsasana, either from ceiling ropes (about a dozen spots) or wall ropes (about half a dozen). If such holds are contraindicated, I would repeat the alternate pose(s) because it’s awkward to exit the pose before he calls time.

Do classmates really “steal” your props?

Yes. In a group numbering 120 to 150, it’s perhaps inevitable that props not obviously claimed are fair game. So, if you gather props for class or practice, place them within sight. Otherwise you might turn around and find nothing there!

Did you get dressed down?

No. (No one gets hit either, contrary to myths and legends about RIMYI.)  Prashant does yell if students dillydally (in his eyes). But it’s a momentary lashing, nothing personal. The next moment, he might make a wry joke. Early in the month, Prashant rattled off the options for our final pose. I heard “Setu Bandha” and set myself in the supported version using a block. Prashant, who was standing nearby, saw me. “No!” he said, loudly. “No Setu Bandha on a brick! I said Setu Bandha on a bench… or Janu Sirsasana, Viparita Karani, Chair Sarvangasana…”

Another time, I joined a group at the rope wall for a standing chest opener. To accommodate more users, each ring has two ropes attached. I erroneously grabbed a rope set (from two rings), thus inadvertently taking an extra spot. Prashant walked over, handed me the right pair, and said quietly, almost gently, “Hold these two.”

Any comments about the hall in general?

The hall is semi-circular, which means that there are no right angles and perpendicular lines. I often felt crooked because I couldn’t align myself the way I do in a square or rectangular room. Very disconcerting!

While most men wore shirts, some always went shirtless during practice. Considering the heat and/or humidity, I hated to imagine their blankets and bolsters soaking with sweat. How about if everyone wears shirts for hygiene and prop maintenance?

Was the restroom clean?

Believe it or not, not once did I set foot in the restroom. (Where is the restroom?) From 6:30am to noon, I didn’t leave the main hall. I managed my fluid intake and trained my body to need infrequent restroom breaks. Why? Well, it’s common knowledge that restrooms in India are less than immaculate, so I avoided public restrooms to the extent possible. At RIMYI, I could always walk to my apartment, a few minutes away, in a pinch.