One of my favorite yoga blogs is Michael Romero’s Home Yoga Practice, which features his writings on being an Iyengar yoga student and teacher in Honolulu. I first “met” Michael when he posted comments on my blog as “yogiromero” in November 2013. He has strong opinions tempered by thoughtfulness and humor. I could tell that he was a serious practitioner. I could relate to his point of view.

In December 2013, he launched his blog, which interested me primarily by his tell-it-like-it-is writer’s voice, but also by his connection to my Hawaiian homeland. Michael lives on O‘ahu and teaches at Iyengar Yoga Honolulu, which I’d once visited in the mid 2000s during a Lonely Planet gig reviewing Waikiki hotels. Small world. According to Michael, my Yoga Spy blog inspired him to start his own—so I claim some credit here! See below for a handful of compelling posts by Michael, who now comments as “yogibattle.”

Michael posts frequently to his blog, the way I did when I started Yoga Spy in August 2009. During my first three months of blogging, I published 16 or 17 posts per month! Back then, I didn’t know if anyone would read my blog or if the well would run dry. 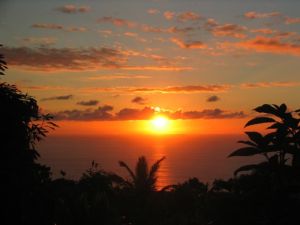 (Back then, I also was on the fence about revealing my identity. So I used (and still use) this Kona sunset pic as my Gravatar. Now I’m happily “out” as Yoga Spy, having concluded that, as in my formally published work, I stand by what I write.)

To be a blogger, one must be a writer at heart—and likewise a rather obsessive observer. That doesn’t change over time, so I eventually saw that the stream of ideas would keep flowing, but not necessarily the time to write them. At any given moment, I have a long list of embryonic ideas, like unfinished business or the mess in your miscellaneous drawer. But nowadays I manage only a couple of posts monthly.

This year I had a fantastic burst around my seven-week India trip. In total, I wrote 23 posts about my time in Mumbai and Pune, plus London. I wrote a heroic 14 posts in the month of August alone, while studying at RIMYI. Insanity!

But, in normal life, my output is drastically more modest. It’s not that I care less about my blog today than I did five years ago. But I’m busier now, and my blog has become more accompaniment than center stage.

How can one carve space and time to maintain a project? How can one hold onto freshness and enthusiasm?

In the early 2000s, when I dabbled in meditation at the Berkeley Zen Center, a couple of the regulars commented that I was lucky to be a beginner. “What do you mean?” I asked, surprised. I was only scratching the surface, after all. “That’s the best time,” one of them said. “When everything is new. Enjoy it.” Zen mind, beginner’s mind.

Maybe I have a “relationship” with my blog akin to those with other people, prone to ebbs and flows, ups and downs. Maybe it’s likewise with yoga and other priorities in our lives. Changes and phases might be inevitable.

In two weeks, a new year will swoop upon us, so, in the holiday spirit, I’ll resolve to blog more regularly in 2015. But, even if not, I can’t imagine not blogging. It is part of what I do and who I am. Same with yoga.

Recommended posts from Home Yoga Practice (it was hard to choose):

Who is better, your regular teacher or the visiting teacher?

Battle within: the request to sub a recently deceased yoga teacher’s class

Subbing in the shadow of the popular teacher

Clearing up a few misconceptions about Iyengar yoga