I can’t believe that 2014 is over. I still have tons of unfinished business and loose ends to tie up. Plus I didn’t read enough books, clean out my closets, practice enough yoga, spend enough time with family or friends…

On the bright side, 2014 was a decent year. I wrote another Lonely Planet Big Island book. I got an iPhone, my first smartphone (why on earth was I such an extreme holdout?). I injured and recovered from a hamstring injury. I replaced a back-wrecking memory foam with a solid zenhaven mattress mattress.

Most memorable, I studied at RIMYI and traveled to India, both for the first time, from late July to early September. It was a rite of passage, so to speak, but was it transformative?

Major events, including a big trip, can carry a myriad of expectations. Not only should the event itself be fascinating or exciting but, once done, one might expect to emerge a different person. I’m reminded of a friend’s description of summer camp at Algonquin Park when he was eleven: “By the end of summer, so much had happened, kids were convinced that no one at home would recognize them.”

While my expectations weren’t quite that high, I perhaps did expect something. I’m talking not simply about asana skill, but about perspective, attitude, and real maturity.

In my experience, however, a major event typically has short-lived consequences. It’s a blip in my normal range. A few months after my trip, I feel (and act) more or less as the person I was before. For an improved 2015, I need to focus not on major events, but on minor, everyday habits and routines. So, here are a few thoughts and a to-do list for 2015:

I average a book a month–in the best of times. I skip dozens of books filed away to read “when I have time.” Do I really lack time? Incrementally, I probably waste hours reading random stuff on the Internet or otherwise zoning out. A book a week is daunting, but two books monthly is within the realm of possibility.

I finished a bunch of India-related books in record time before my trip; once back, however, I read nothing from September to December, when I devoured two Somerset Maugham novels back to back: Mrs Craddock and The Merry-go-round.

Spending more time reading might seem like a luxury, but I’m much happier when part of my mind is living in a book. Since being happy enhances everything else, I’ve decided to read Mr Maugham’s fiction oeuvre, more or less in order of publication, this year. Follow along on my What I’m Reading page. 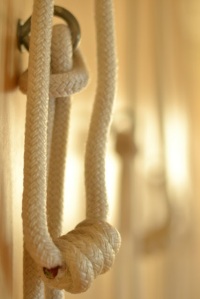 I recently met a newish Iyengar yoga student (about 18 months in) who raved about it. Middle-aged, slightly overweight, and male, I was pleasantly surprised by his enthusiasm. He talked not only of the physical benefits but, pointing to his head, said that he does yoga “for the mind.”

Manifested in him was the steep learning curve of a novice. I miss that initial stage, when everything is a mini revelation. It got me thinking: Where did my practice go this year? Forward, backward? What am I avoiding in my practice? For 2015, I’m planning a monthly home practice “focus” to include asana (and pranayama) that fall to the wayside.

If anyone has emailed me and not [yet] received a reply, here’s why: I’m drowning in messages. Among my five Gmail addresses (plus one virgin Mac address kept as backup), I harbor 50, 75, sometimes close to 100 “pending” messages in my Inbox before filing or trashing them. The more complex, lengthy, or personal the message, the longer they could sit. (If you send a vague inquiry about Hawaii, forget it. It’s a topic too big and close to my heart. If you want a prompt reply, ask very specific, answerable questions!)

I am sick of my prodigious Inbox. It weighs me down and clutters my mind each time I turn on my computer. Between now and the end of January, I resolve to clean out my email Inbox.

Blog posts might seem easy to write, but for me they take an inordinate amount of time and energy. While they are more time-consuming that they seem, I also yield to the “work expands” theory, also known as Parkinson’s law: work expands to fill the time available for its completion.

I’m more productive under pressure, so I need deadlines. Ages ago, I skimmed a book by a professional organizer/clutter clearer who claimed that any project can be done in two weeks. I can’t recall either author or title, but the two-week time frame stuck in my head. Hmm, a post every two weeks?

The main thing that concerns me at the end of the year: How much time did I spend with the most important people in my life? The answer is usually the same: not enough. (On Thanksgiving, I did make a family trip to Disneyland for my little niece. So glad I did. There’s no substitute for such shared memories.)

In TKV Desikachar’s book The Heart of Yoga, he addresses how to determine one’s progress in yoga: Look at your relationship with people. He writes, “The success of [y]oga does not lie in the ability to perform postures but in how it positively changes the way we live our life and our relationships.”

When faced with the age-old dilemma between what’s urgent and what’s important, I must not let the urgent win all the time.

To Iyengar yogis, assessment means one thing: being assessed for a particular level as a teacher. Nothing wrong with that. But I can’t help thinking about one of Prashant’s statements: “There is certification for yoga teachers. Why is there no certification for yoga students? You go to a two-hour ‘yoga’ class. Do you think you’ve done two hours of ‘yog’?”

It made me think: What if I were being assessed for all the “roles” in my life? Would I pass them all?